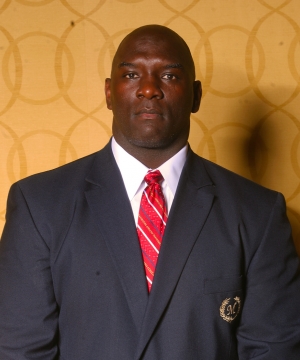 Pat refused several scholarship offers to pursue his dream of playing football for the Florida Gators. In 1986, Pat walked-on at the University of Florida and became the first true freshman to start for the nationally ranked Florida Defense. Earning a full scholarship in 1987, Pat went on to become a four-year starter, leading the Gators in tackles in both 1988 and 1989. Pat was also team captain in 1989.

After three short years of professional football with the San Diego Chargers and the NFL Europe's Frankfurt Galaxy, Pat returned to his alma mater.

1996 SEC Football Champions, who went on to become the 1996 National Champions.

Pat became the Head Strength Coach at the University of Illinois in 1997. During this time, Pat coached the Illinois Basketball Team to the Final Four.

College Bowl appearances for Pat include the:

Coach Moorer's jacket will be presented tonight by Master Strength and Conditioning Coach Dan Austin from the University of South Carolina.