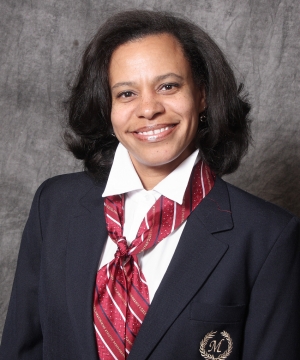 Corliss Fingers, The Director of Strength & Conditioning at Bethune-Cookman University, just finished her fifth year with the Wildcats where the Women's Basketball team were regular season MEAC Champions.

She previously held the title of Head Strength Coach at Southern University where she was the first and only female to hold this position in the SWAC conference. For the first time since 2004, Fingers has able to help the Jaguar football program to reach SWAC championship appearance two seasons in a row. The Men's basketball program reach the NCAA tournament for the first time since 2006.

Corliss' interest in sports began at the age of 5 when she began competing in track & field in her home state of North Carolina. She continued her successful track and field career through college where she competed for the University of North Carolina at Chapel Hill. In 1992, she graduated from UNC with a B. A. in Physical Education with a concentration in Wellness and Fitness. Following graduation, she was a personal trainer and taught various levels of aerobic conditioning at a local gym. Corliss began her career as a collegiate strength and conditioning coach in 1994 where she served for two years as an assistant under Head Strength Coach, Jeff Madden.

Coach Fingers' 15 year coaching career at the Universtiy of Maryland was extremely busy and challenging as she has was directly responsible, at one point or the other, with the complete athletic preparation of 20 of the 27 intercollegiate programs. She was a critical part of the Women's Volleyball program's string of three consecutive ACC Championships and was a valuable contributor to the football program's three consecutive New Year Day's Bowl games in 2001, 2002, and 2003. In the spring of 2005, Corliss was elevated to Assistant Director of Strength Training for football, to go along with her other duties and responsibilities. This is the first time a female has been appointed to that position.

But of all her achievements in the strength and conditioning field, perhaps none have been as rewarding as the national championship earned in 2006 by the University of Maryland's Women's Basketball program. Coach Fingers' contribution in the preparation of the Lady Terps was a critical element in capturing Maryland's first Women's Basketball National Championship and setting a NCAA Division I record of 34 wins in a season.

Throughout her career in strength and conditioning, Corliss has been extremely fortunate to work with some great strength coaches and some awesome athletes. She hopes to continue to learn and grow as a professional while always giving her all to prepare, coach, and motivate athletes at the collegiate level for many years and seasons to come.

Even with the NCAA Championship ring, the bowl rings, and the numerous A.C.C. Championship rings (including the ones she earned as an athlete!), her biggest accomplishment and the most important ring ever given to Corliss is the one she received on October 9, 2005 when she married Dr. Earnest M. Fingers. She is very happy and excited about the future in her marriage, family, and her career. Corliss recognizes that she has been blessed in so many areas of her life and thanks all those who have played a part in her success.