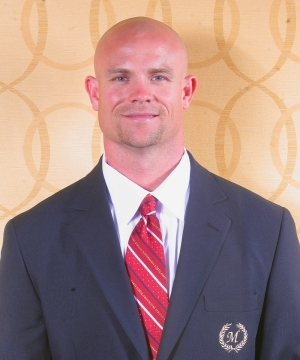 Scott Sinclair has been the Associate Director of Strength & Conditioning at the University of Central Florida for the past eight years. Sinclair is responsible for the strength & conditioning programs for women's track & field and baseball, and he oversees all other Olympic sports. In addition, he assists Director of Strength & Conditioning, Ed Ellis, with all aspects of strength & conditioning for the football team. Sinclair's path to strength & conditioning began with an internship during the summer of 1998 at Wake Forest University. After graduating from Guilford College in 1999 with a degree in sports medicine and lettering in both football and baseball, Scott accepted his first full-time job as an assistant strength coach at Wake Forest under Ed Ellis. While at Wake Forest, Sinclair implemented strength & conditioning programs for a variety of athletic teams and assisted with the football program. During his time at WFU, he helped guide the men's basketball program to an NIT championship. In 2001 Sinclair moved to Atlanta where he held the position of Assistant Director of Player Development at Georgia Tech. While at Tech, his primary responsibilities included assisting with all aspects of the strength & conditioning program for the football team. He also was in charge of the strength & conditioning program for women's basketball. Three years later, in 2004, Sinclair became the Associate Director of Strength & Conditioning at UCF, completing his master's degree in physical education in 2006. During Sinclair's 13 years as a full-time strength and conditioning coach, he has been a part of eight bowl games, two football conference championships, and multiple Olympic sport championships. During Sinclair's career, he has had the privilege of working with many athletes that went on to play professionally in the NFL, NBA, and track & field. In addition to his coaching responsibilities, Sinclair leads chapel service for the football program. Sinclair would like to thank MSCC Ed Ellis for taking a chance on a rookie strength coach right out of college. Sinclair has been with Coach Ellis for his entire career and thanks him for believing in him, teaching him, and most importantly, for his friendship. Sinclair would also like to thank his beautiful wife Farrah and their son, Creed, and daughter, Asher, for their love and support.