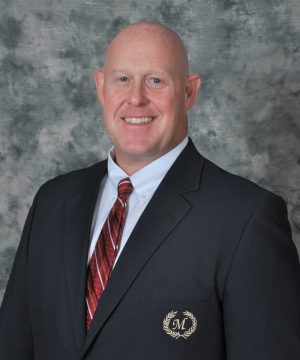 Chris Doyle is in his 17th year as strength and conditioning coach for the University of Iowa football program.

As the head of Iowa's strength and conditioning program, Doyle has helped the Hawkeye program participate in 12 bowl games since 2001, including the 2015 TaxSlayer Bowl. The Hawkeyes posted seven wins in 2014. The Hawkeyes won bowl games following the 2008, 2009 and 2010 seasons, defeating ranked opponents in both 2009 and 2010. The Hawkeyes have ranked in the final top 10 of both major polls four times in the past 13 seasons.

Iowa has appeared in eight January bowl games since 2001. The Hawkeyes have won 6-of-12 bowl games under Kirk Ferentz and his staff, including four January bowl victories. The January Bowl wins have come over Florida (2004 Outback), LSU (2005 Capital One), South Carolina (2009 Outback) and Georgia Tech (2010 Orange). Iowa has won 104 games over the past 13 seasons, including 61 Big Ten games. The Hawkeyes earned a share of the Big Ten title in both 2002 and 2004 and tied for second in 2009. Iowa has finished in the Big Ten's first division in 12 of the past 14 years.

The NSCA named Doyle the Big Ten Strength Coach of the Year in 1999. He was one of 20 nominees for the Professional of the Year Award, given annually and selected by the NSCA membership. The award recognizes college professionals who have shown excellence in strength training and conditioning programs.

He served as director of strength and conditioning for the University of Utah in 1998. Under Doyle's direction the Utah basketball team played in the national championship game. While in Utah, Doyle also served as state director for the NSCA.

Doyle was assistant strength and conditioning coach at the University of Wisconsin from 1996-98. He oversaw the training programs for football and hockey teams during this time. The Badger football team participated in two bowl games (Copper and Outback) and the hockey team won the WCHA championship during his tenure.

As a strength and conditioning professional, Doyle has tutored 189 student-athletes who have advanced to the professional ranks in the NFL, NHL and NBA. Iowa has had a total of 43 players selected in the past 11 NFL drafts, including six in each of the 2010, 2011 and 2012 drafts, and three in the 2014 and 2015 drafts. Overall, 52 Iowa players have been drafted in the past 13 years, with seven first round selections and 10 players being selected among the top 50 picks. In addition, 60 additional Hawkeye players signed free agent contracts in the past 11 years. Iowa, since 2003, has seen five former walk-ons selected in the NFL Draft.

Over the past 12 years, 123 of 137 (90 percent) of Iowa's senior starters were selected in the NFL Draft or signed to a NFL free agent contract. Three Hawkeyes were selected in the 2015 NFL Draft, while seven additional seniors signed free agent contracts immediately following the draft. Iowa has had a first round selection in four of the past six drafts, including OL Brandon Scherff (5th selection) in the 2015 NFL Draft. Doyle has mentored 55 former assistants who have advanced in the field of Strength and Conditioning, with 20 becoming head strength and conditioning coaches.