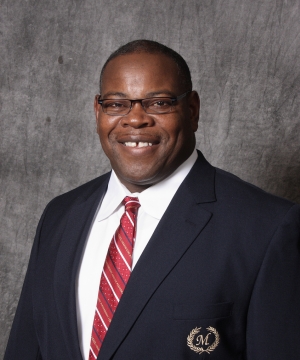 George Smith is the son of the late Willie and Willie Mae Smith. He was born in Denmark, South Carolina, population 4,500. He is one of eleven siblings, seven boys and four girls. They grew up in a two bedroom, "shot gun" house (you could shoot straight through the front door, bullet exiting the back door and not hit any walls). He grew up sleeping with his brothers and sisters. His parents had very little education; his father a second grade education and his mother a seventh. Yet, they preached the value of an education to all their children.

In George's adolescent years, he began lifting weights to change his physical appearance. Lifting weights became a part of this daily life that led him to compete in weight lifting competitions. He was very successful; he won several teenage national titles and set a national dead-lift record by lifting 745 pounds, which was untouched several years. He played football in high school and earned a scholarship to the University of South Carolina. While attending the University of South Carolina, he earned an undergraduate and graduate degree. While working on his masters, George worked as a graduate assistant in the strength and conditioning program, accomplishing one of his many goals.

On January 7, 1993, George returned with "Maddog" to the east to work for the University of North Carolina, Chapel Hill. He considered working in this athletic department as the "chance of a lifetime". He continued working diligently as Maddog's top assistant strength coach. His hard work paid off when he was promoted to Director of Strength and Conditioning for Olympic Sports. In this position he positively impacted many football players that went on to play in the NFL. Football was not the only sport Bulldog impacted. He worked with the Carolina women's basketball team which won a national championship. He and the team were given the ultimate award, an invitation to the White House by President Bill Clinton.

Bulldog has trained thousands of athletes. Many have gone on to become Olympians. Some of most notable are: Alan Johnson, 100 meter gold medallist; Mia Hamm, soccer Olympian; and Marion Jones, the great Olympian sprinter.

In 1998, Bulldog was promoted to Assistant Athletic Director for Student Athlete Development at the University of North Carolina with additional duties in athletic administration.

In 2000, Bulldog moved on to North Carolina Central University where he is presently employed as Senior Associate Athletic Director for External Affairs and Director of Strength and Conditioning. He continues to work as an athletic administrator and strength coach. More importantly, each day that comes, he looks forward to "positively impacting young people's lives."