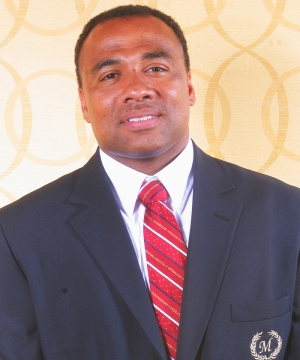 A native of Clemson, South Carolina, Larry began his collegiate career as a track and field athlete at North Carolina State University. After one year, however, he transferred to Clemson University, where he earned his Bachelor of Science in Management and his Master's degree in Education. Lettering each year of his track and field career, Larry accumulated three ACC Team Championships and two NCAA Team Runner-up Titles. Larry was also honored in 1994 as the ACC Student Athlete of the Week. Larry led his team on the track and in the class room with a team high GPA of 3.75 in 1995.

Larry began his Strength and Conditioning career as a Graduate Assistant at Clemson shortly after he graduated in May of 1995. He was naturally handed the responsibility of training both men's and women's track and field. Larry also assisted in all areas of strength, speed, and conditioning for the Clemson Football team. In 1998 he was hired as a full-time assistant, two years later becoming the Assistant Director. He was responsible for supervising a staff of 15 and overseeing all sports.

Throughout his coaching experience, Larry has led his track and field athletes to become Conference, National, and Olympic Champions. In football, he has worked diligently to assist the Clemson Football program reach great heights. The team has achieved post-season bowl game play in 14 of his 16 years at Clemson, the most recent being the BCS 2012 Discover Orange Bowl. Many former Clemson athletes currently in the NFL return to the University to train during the off-season.

Coach Greenlee would also like to note his appreciation for two former Clemson Assistant Directors: Ruben Mendoza, currently at Wayne State, and John Sisk, currently at Furman. He greatly appreciates their influence and guidance.

Greenlee holds the SCCC certification through the Collegiate Strength and Conditioning Coaches association (SCCC), and the Club Coach certification offered by the USA Weightlifting Federation.

Larry and his wife Shirley, have been married for 12 years. They have two children, DJ (17) and Sydnee (9).