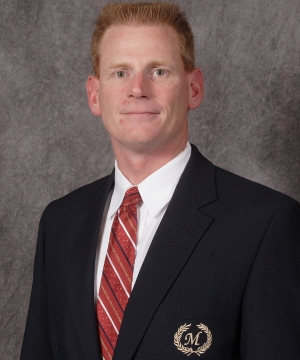 Darren Edgington grew up on a farm in Norene, TN. His parents, both high school teachers, gave him a wonderful background in hard work and accountability in a wonderful, loving home. He played iron-man style football while attending Watertown High School, lettering all four years. Upon graduation, Darren entered the Navy, enrolling in the nuclear engineering program and later joining the submarine force. While in the Navy, Darren would return to Middle Tennessee on leave and continue his association with Doc Kreis, whom he had met years earlier while playing football. After six years in the submarine force and receiving an honorable discharge from the Navy, Darren returned to the area and enrolled at Middle Tennessee State University. While at MTSU, Coach Edgington continued to work with Doc, and later Coaches Matt Riley and Robb Rogers, overseeing most of the female Olympic Sports and assisting with football.

Darren graduated Cum Laude in 1997 with a degree in Wellness and Fitness and completed his Master's in 2000, conducting his thesis on "The Electromyographic Comparison of the Superior and Inferior Portions of the Rectus Abdominis." He continued to work at MTSU until Coach Noel Durfey, formerly at the University of Mississippi, called him to Ole Miss to work with the Women's Basketball Team. There, Coach Edgington assisted the team to an "Elite" run through the NCAA Tournament in 2007. Due to the team's demonstration of superior conditioning and strength, ESPN published an article on Coach Edgington and his work with the team. In 2008, Darren accepted the position of Head Strength & Conditioning Coach at Murray State University, overseeing the Football, Baseball, Soccer, and Volleyball programs. In 2012, he joined the staff at Vanderbilt University. He produced the DVD entitled "Functional ACL Pre-Hab Exercises" and has lectured at the CSCCa National Convention detailing protocols for ACL Injury Prevention Exercise. "

Coach Edgington would like to specifically thank his family for all the help and support they have shown him throughout his life. Coaches Noel Durfey, Matt Riley, and Jami Clinton have been wonderful teachers and friends for many years, assisting in his growth as a strength coach. Robb Rogers has been a tremendous ally, friend, and coach--teaching Darren many of the injury prevention exercises he continues to utilize. Coach Edgington owes his passion and love of this profession to E.J. "Doc" Kreis. Without Doc's help to a "young, scrawny kid, from a little high school many years ago and his tutoring and teaching throughout Darren's years in the Navy and later as an assistant coach to Doc at MTSU, Coach Edgington would not be here this evening. And lastly, but most importantly, he wants to thank his beautiful wife of 15 years, Julie, who without her support and love, none of this dream would have been possible!