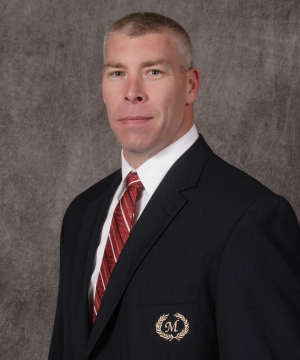 Scott Swanson, MSCC, is entering his fifteenth year as the Director of strength and conditioning at West Point.

A 1992 graduate of Wake Forest University, Swanson spent the 1995 and 1996 football campaigns as an assistant strength and conditioning coach at Army before departing to serve in the same capacity at Stanford University. He returned one year later in 1998 to take over the Black Knights' head job.

Since his return to the Academy, Army has captured 40 league championships and sent numerous teams to postseason competition. In all, Army athletes have secured 44 All-America certificates on national and regional levels since 1998.

Swanson oversees the unique task of training cadet-athletes at West Point. He directs the training of 1,000 athletes, operates three weight rooms, and manages five off-site facilities throughout the country during summer assignments.

The Parkersburg, W.Va., native was instrumental in the development of Army's 20,000 sq/ft strength development center housed in the new Kimsey Athletic Center, which opened in April 2003. This area features state-of-the-art equipment to accentuate the overall development of a host of Army athletes, but most notably serves football.

While at Stanford, his work with the gridders centered on speed development. During his one-year stay in Palo Alto, the Cardinal men's and women's swimming and diving teams both captured national championships and the men's basketball team reached the Final Four.

After earning three football letters at Wake Forest, Swanson moved to the weight room as an assistant strength coach in 1992 until 1995. Swanson also served as the interim head strength and conditioning coach at his alma mater. The Demon Deacons had 18 All-Americans during his tenure, the men's basketball squad captured an Atlantic Coast Conference crown and the track team produced national champions in the shot put and discus.