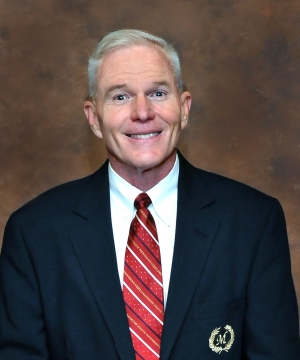 Dr. Chuck Stiggins, a former college football and track & field athlete and competitive weightlifter, currently serves as the Executive Director of the Collegiate Strength and Conditioning Coaches association (CSCCa), a nationally recognized professional, educational organization established specifically for strength and conditioning coaches of collegiate and professional athletic teams. In addition to serving as the Executive Director of the CSCCa, Chuck was also the organization's founder and first President. Dr. Stiggins previously served on the Board of Trustees for The Huntsman World Senior Games from 2002-2006. In addition to his duties as a board member, he was responsible for overseeing the Health Screenings for all participants in the Games.

In addition to Chuck's contributions on the national and international levels, he provided 28 years of dedicated service to Brigham Young University. He served, first, as the Head Strength and Conditioning Coach for the BYU Athletic Department, followed by a five-year appointment to the Department of Exercise Science as a university professor.

The success of the BYU Athletic Department during this time resulted in two Outland Trophy Winners, a Heisman Trophy Winner, as well as literally hundreds of All-Conference and All-American athletes. After finishing their careers at BYU, many of these athletes went on to compete on the professional level in a variety of sports. Coach Stiggins' strength and conditioning program undoubtedly played a significant role in helping these athletes reach their full athletic potential.

Chuck developed a comprehensive, computerized strength training program which eliminated the guesswork from strength training by providing sets, repetitions, poundage, intensity, and recovery periods for each individual based on solid periodization concepts. The program was individualized by sport/position/event and then tailored to meet the needs of each individual athlete. The program was also designed to be used by physical education classes, health clubs, wellness and fitness centers, sports medicine clinics, as well as by the general population (ages 14 and older).

Dr. Stiggins has well over 140 publications, including a book on conditioning athletes that he co-authored with the late, legendary BYU head football coach, Lavell Edwards. He is also the Executive Editor of the recently published textbook The Professional's Guide to Strength and Conditioning: Safe and Effective Principles for Maximizing Athletic Performance. He has spoken at numerous functions across the country and has done consulting for high school, collegiate, and professional athletic teams as well as for a variety of health clubs, fitness/wellness centers, and sports medicine clinics. Chuck has earned national recognition as a prominent speaker, consultant, software developer, and author, and is considered to be one of the leading authorities in his field.